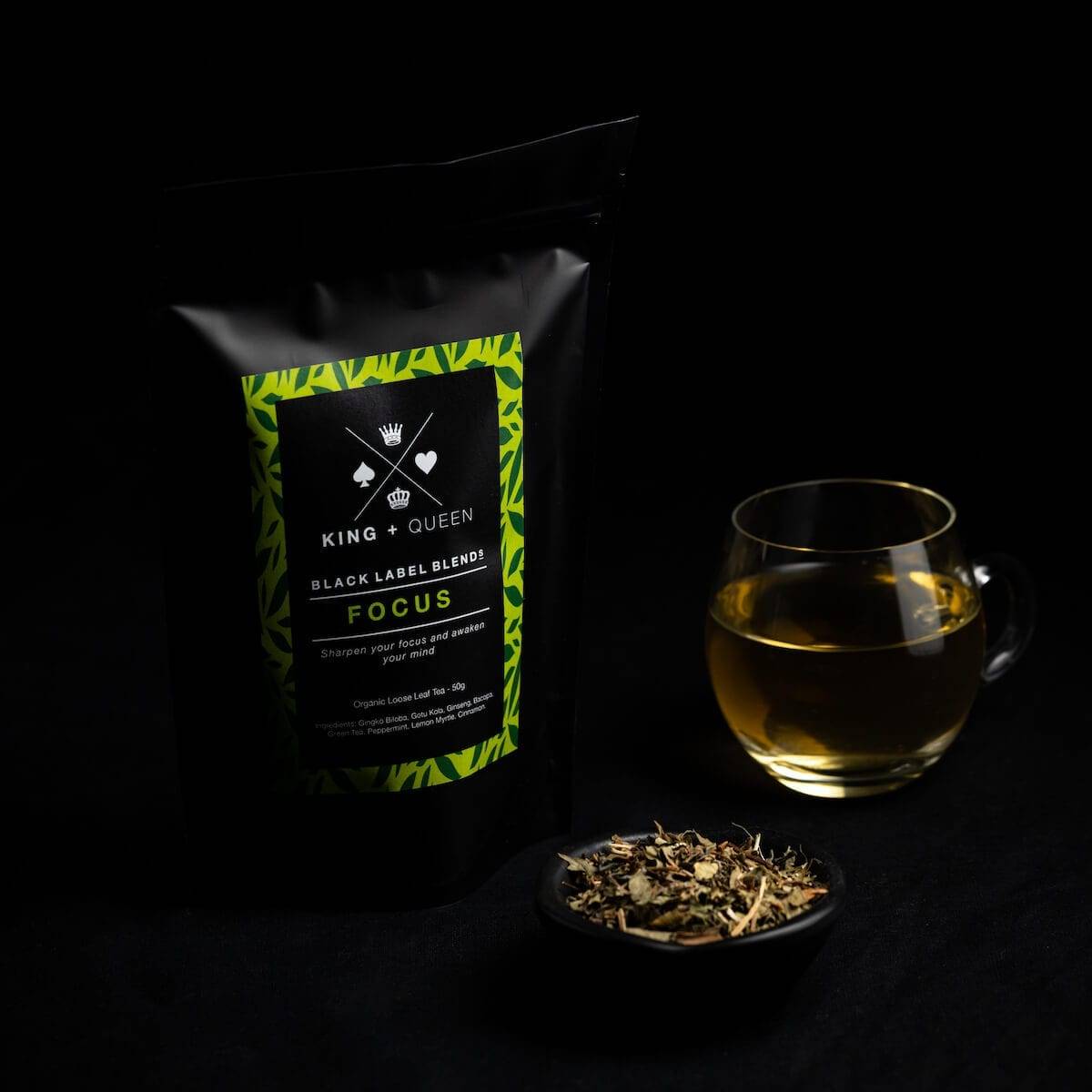 A Nootropic Health Tea Created For Those Needing To Be At There Peak Mentally.

Have you been feeling sluggish, foggy and unable to think clearly? Our Black Label Blend - FOCUS - will help you get your mind right and focused!

This strongly aromatic herbal tea is full of ancient nootropic ingredients that will boost your brains capacity and function. Based on Ancient Ayurvedic herbs, this herbal tea blend will give you the help you need to reach that deadline, solve that problem at work and reach new levels.

Focus is flavoured with potent Ceylon Cinnamon, Peppermint & aromatic Lemon Myrtle to stimulate the mind, followed by Green Tea and Gotu Kola which have been used for centuries to increase mental stamina. The added Gingko Biloba increases working memory and contains antioxidants responsible for protecting the brain. Ginseng & Bacopa (Brahmi) are responsible for increasing energy and cognitive functioning, including focus, memory and clarity.

What are the benefits of drinking Focus Nootropic Herbal Tea Blend?

Ceylon is regarded as “true” cinnamon which is less bitter than the store-bought cinnamon. It’s been proven by scientists to enhance cognitive functions such as your memory and visual perception. We’ve infused our teas with just the right amount of cinnamon to boost your energy and keep you laser-focused at work.

Menthol-based ingredients are known to enhance a person’s concentration. Aside from tasting sweet, it can also lower your stress levels. This is one of the reasons why mint candies are so popular. Peppermint gives a soothing sensation through its taste and scent. It has a sharp fragrance that stimulates the brain and makes it more alert.

Lemon myrtle is a common Australian herb that’s widely used in cooking. Indigenous Australians use them for medicinal purposes, too. It has a myriad of health benefits and one of them is improving your concentration. It has a sweet, lemony odour that increases the heart rate as well as your alertness level.

The caffeine and l-theanine contents of green tea can help you focus on your task. L-theanine can keep you on your toes by escalating the alpha-wave activity inside your brain while caffeine is none other than your favourite go-to stimulant.

Gotu kola is a great memory-booster. Its leaf and root extracts are said to improve cerebral functions. It’s a traditional perennial plant that is commonly found in Southeast Asian countries. This plant is a member of the parsley family and it’s well-known to improve nerve functions. It even has the potential to treat Alzheimer’s disease.

Increased stamina is just as important as having deep focus. Ginseng gives you both. It boosts your energy while keeping you concentrated for long hours. It’s a traditional Chinese herb with many medicinal functions.

Several studies prove that ginkgo biloba extract can help with memory problems related to dementia and Alzheimer’s disease. This herb increases your memory as well as your cognitive abilities.

This product is not intended to be a substitute for professional medical advice, diagnosis or treatment. Information on the traditional uses and properties of herbs are provided on this site is for educational use only, and is not intended as medical advice. If you have any serious health concerns, you should always check with your healthcare practitioner before self-administering herbs.

Allow to steep for 4-8 minutes depending on desired strength.