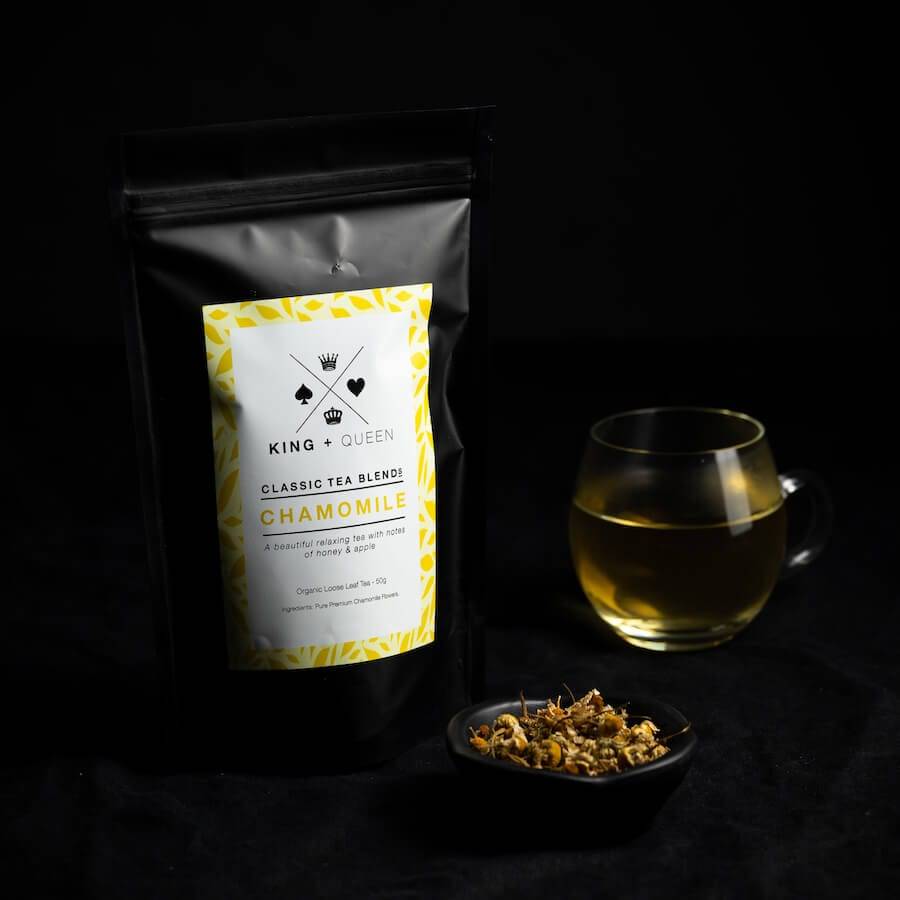 Our organic chamomile tea uses only the finest tea grade chamomile, which gives it its intense aroma and sweet taste.

The use of Chamomile as a herbal tea dates back to ancient Egyptian times. Chamomile was not only used as a tea but also as a remedy for a cold.

Did you know the name for Chamomile originated from the ancient Greek word meaning 'Ground Apple"? This was probably about not only its apple-like taste but the size of the chamomile flower buds. The specific variety of Chamomile known as "Roman Chamomile" was named by 19th-century Botanist who found some growing in a Roman Coliseum.

Due to the presence of Chrysin in Chamomile tea throughout history, most have used this as a mild sedative & sleep aid. Even though Chamomiles most known use is as a calming sleep aid, this is not its only use.

May Assist with Sleep

The first most obvious benefit of drinking Chamomile Tea is its sleep-inducing properties. There have been studies done to determine the effectiveness of Chamomile and restful sleep. Many of them have noted that the antioxidant apigenin's presence is key to helping bind to sleep-inducing receptors. This is why it is the main ingredient in our Sleep Tea Blend.

Due to Chamomile's anti-inflammatory properties, some experts believe this could reduce damage to the pancreas. This alone is a great reason to start drinking Chamomile Tea regularly. Not only can it protect the pancreas, but it can also reduce fasting blood sugar, a key indicator that is looked at with people with diabetes.

While mostly anecdotal, there has been some evidence to suggest that the antioxidants present in Chamomile apigenin can fight cancer cells. This is mainly for cancer types like the digestive tract, prostate, uterus, skin and breast. A study of long term Chamomile Tea consumption showed that people were less likely to develop thyroid cancer.

Was Used In Ancient Times To Speed Up Recovery

The Egyptians, Romans & Greeks used chamomile flowers to form a paste applied directly to wounds. This was said to almost half recovery times and help prevent scarring. Modern studies have been done with Chamomile, which has also shown to help speed up the recovery of wounds and recover faster from a cold.

There are no reviews yet.

Allow to steep for 2-4 minutes depending on desired strength.

*Individual results may vary on reviews